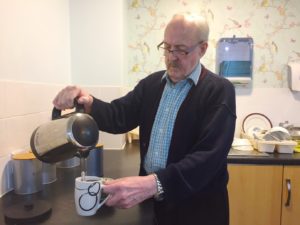 Afternoon Tea Week starts on 14th August and is simple to join in. Just pause for afternoon tea as part of your day, sit back and enjoy a nice cuppa which, according the Tea and Infusions Association, will help lift your spirits and keep you going.

Gibraltar Nursing home in Monmouth drink around 150 cups of tea a day and are planning to continue brewing throughout the Afternoon Tea Week. On average in the UK, we each consume 2kg of tea a year, but it hasn’t always been used as a drink.

For centuries, tea was used mainly as a medicine to reduce fevers. It took 3000 years to become an everyday drink and after water, it is the most widely drunk beverage in the world.

The UK consumes 165 million cups of tea each day which is 2000 cups every second. In Gibraltar Nursing Home, the tea drinkers’ favourite brews include English Breakfast and Yorkshire Tea

Some of the Home’s tea drinkers live with dementia and to make their own tea, they are carefully assessed as there are some risks associated with kettle use. Where possible, though, tea making is seen as a positive risk since it maintains an individual’s independence and continues former routines if they made tea for themselves before moving into care. Gibraltar aim to be a Home from home and have small kitchens equipped to look like normal family kitchens.

Research says that Tea is good for you as it contains “polyphenols” — antioxidants that help our bodies fight off disease.

Afternoon Tea Week taps into a British tradition, helping to bring a bit of elegance to an otherwise unremarkable time of day. And, if reading all this has made you thirsty, Gibraltar Nursing Home invite anyone who wants to find out more about what they do and fancies a cuppa, to drop by for a chat and a cup of coffee. Or tea.