Last month we celebrated International Day of Charity, a day to raise awareness of charitable causes that bring people together to make a difference and commemorate the brilliant minds behind them. We decided to honor the humanity and generosity of the people behind these causes by talking with Wendy Hawkins, former CEO of the Welsh charity Clybiau Plant Cymru Kid’s Club Wales, and a family member who lives with us in Monmouth at Gibraltar Nursing Home.

Wendy, a 72-year-old citizen of Cardiff who has lived all over Wales and England, invited me from Bristol to visit her in her Monmouth Care Home and learn about her life and time working in the charity sector. After being taken on a wild goose chase by a rogue sat nav I finally reached my destination.

I was given the grand tour through the home’s eloquent hallways, their walls adorned with personal identity boards illustrating the many personalities and life histories that make up the community at Gibraltar until eventually, we reached Wendy’s room. She was as warm and welcoming as I expected her to be and I was eager to get to know the woman who had gone from small-town farm life beginnings to climbing her way to a CEO position.

At first, I felt that I was the one who was there to be interviewed. I had been told that Wendy makes it a priority to get to know people and her gregarious and curious spirit shone through from the moment we sat down to talk. Once we finished talking about me, Wendy began laying out the map of where her life has taken her- it certainly hasn’t been a straight road. 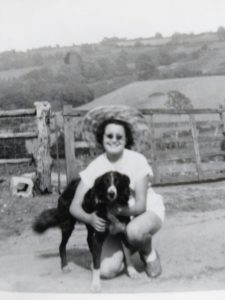 dwelling for another when Wendy was 11 and moved to Tump farm in Monmouthshire with her mum, 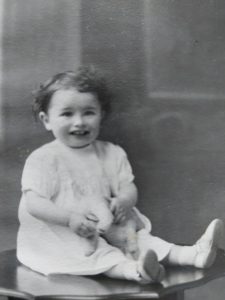 dad, and brother Glynne. Her dad believed in working hard and for everyone to play their part, so they all had their roles on the farm. When Wendy returned home from school she was responsible for heading up to the field and bringing the sheep in. The responsibilities she was trusted with developed a strong work ethic in Wendy from a young age and would come in handy when a future opportunity was presented to her. 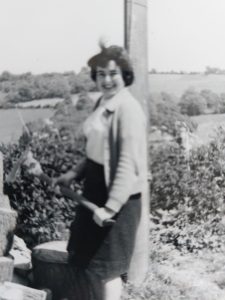 When Wendy left school her farming roots remained, and she became a teacher in rural science. She taught for a few short years before motherhood called and she took a break from work life to introduce daughter Nia and son Owen to the world. It was only when they started playgroup that she was presented with an opportunity that would steer her away from teaching and onto a surprising but welcoming path.

In 1985 Wendy was introduced to Wales PPA (Wales pre-school Playgroups Association) charity, which is known today as Early Years Wales and was invited to come on board as a trustee on the committee. When a roof of a school building fell in they pulled off a successful raffle and campaign to get it fixed, and Wendy got her first taste of what can be achieved when you come together as a community. They even got a grant from the lottery to write a book about the charity’s endeavors, with Wendy contributing a chapter titled ‘The Children left Playgroup but I Didn’t.’ 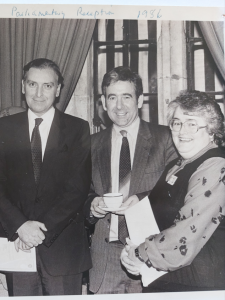 Over 16 years of working for Wales PPA and climbing her way from trustee to National Executive Officer had supplied Wendy with all the knowledge she needed to step into a role that came with a huge responsibility. In 2002, she was appointed as Director of Clybiau Plant Cymru Kid’s Club, a charity whose purpose is to prevent latchkey children, instead offering them a safe space to come to before and after school as well as during school holidays. This operates as a vital service to families, allowing parents to work longer than the school day permits. Working closely with the Welsh Government, Wendy helped to set up, develop and support out-of-school childcare clubs that are affordable and accessible.

A Life of Purpose

Wendy found a naturalness to her role in charity work in a way she never quite did as a teacher. That role was dedicated to developing confidence in children by allowing them to explore social skills in a supervised setting, and supporting them to find creativity in play and activities, meeting the needs of children that aren’t found at home on their own. The charity also encourages Welsh language development, helping to preserve a Wales of vibrant culture and allowing children to receive childcare in their preferred language.

The most fulfilling part of Wendy’s role was the achievement she felt when a grant was accepted. “That’s 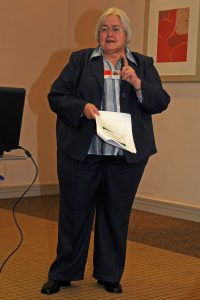 when you measure the success of what you’re doing, and you realise that you really can make a difference.”

Speaking with today’s CEO of Kids’ Club, Jane O’Toole, she had only loving things to say about her former boss. “Wendy was a great teacher and guide, supporting me to learn Third Sector governance, and together we developed the newly formed organisation, its policies, and procedures and helped it grow. Most of all she was a great support to my career development and I will never forgive her for persuading me to apply for her position when she retired! Joking aside, without her, I would not have the confidence to do what I do today, continuing in her work of leading this great organisation which is celebrating its 21st birthday this year.”

Road to Recovery after Illness

She was only three days into her retirement when Wendy woke up and found herself lying on the floor of her home. “I remember thinking what a foolish thing for me to have done” she explained to me since her initial thought was that she had fallen out of bed in her sleep. But a few moments later reality set in and the seriousness of the situation dawned on Wendy. She couldn’t move.

Wendy had experienced a stroke, leaving her with severe weakness in her left side and a long road to recovery in front of her. After decades spent fighting for a better life for others, it was time to focus on herself for a change. Since a fall in her home fractured her ankle, Wendy has been unable to walk and after spending time in a hospital and a care home that didn’t meet her needs, she was welcomed into Gibraltar Nursing Home in 2021.

I asked how she found life in the home here different. “There’s good community spirit here, everyone gets along and it’s a nice atmosphere to be a part of. And you can’t fault the care.” It is clear she has built up good relationships with team members and looking around her personalized room, I was happy to see that Wendy has found a place that can she can call home. Her beautiful children’s and grandchildren’s faces frame the walls, and she takes me through a slideshow on her big flat-screen TV. 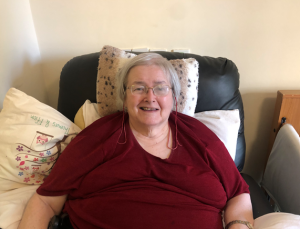 As the time came for me to make my way back to Bristol, Wendy cheerfully told me she was going to spend her afternoon catching up on Bridgerton – the first season because it’s “sexier than the second one.” It was a pleasure spending an afternoon with someone who has such a great sense of humour and is able to laugh at life.

Wendy has spent a big portion of her life improving the lives of those who live in her little corner of the world. Gibraltar Nursing Home is proud to support their family members and the causes that are important to them and have made a donation to Kids’ Club in Wendy’s name to support the many wonderful projects they continue to operate and contribute towards ‘A Wales where children play, and communities prosper.’